If you are travelling along New Zealand's beautiful surf beaches you will most likely come across people fishing with Kontikis. A Kontiki is a device to carry longlines with baited fishing hooks from the beach into deeper water. 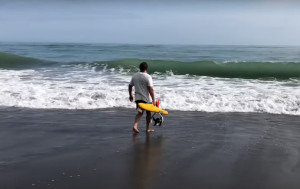 Often these longlines have up to 25 hooks and are fished up to 2 kilometres offshore. Kontikis are also known as beach torpedoes and different brands such as Powertiki, Seahorse, Sea Harvester and Fish Seeker are available for sale.

They are quite expensive and are powered by trolling motors with 12-volt lithium or deep cycle batteries. The premium models have an inbuilt GPS and compass to stay on a straight course.

To set your distance you usually have to set a fixed run time at the beach and when the timer is up the Kontiki will stop running and the weight of the sinkers will drag the hooks to the bottom of the sea. By knowing the speed of the motor you can estimate the distance to timer ratio. Generally, a Kontiki goes at a speed of around 100 meters per minute.

The Kontiki stays connected to the end of the fishing line during the fishing session and after some time fishing, usually 30 minutes to an hour, everything is being reeled back to shore. A heavy-duty electric winch is needed to reel everything back as the Kontiki, the fishing line and any potential catches are quite heavy.

Often you’ll see people using quad bikes to carry all this gear to the beach.

A downside of having the Kontiki at the end of the line is that if the line gets snagged or bitten through by a shark, the Kontik is lost at sea. Many Kontikis are lost each year. Sometimes they are found washed up at beaches or by boaties. It is a requirement to have contact details in or on the Kontiki and oftentimes lost Kontikis are returned to the owners. At other times they are lost forever and this would be a very costly and frustrating experience for the owner.

Kontiki fishing is quite popular in New Zealand and it’s probably one of the last few countries where fishing with so many hooks is still allowed, even now in 2022. Fishing with this many hooks is not sustainable and often results in many fish being caught at once, including undersized fish which will usually not survive the release. Besides this, there is also a problem with pollution if a Kontiki breaks off. A 1000 meter stray fishing line with hooks can damage the ocean floor, kill fish, birds and other marine life.

Despite this, the interest in and sales of Fishing Kontikis is very high and people use these devices in the hope to feed the family with fresh fish or fill up their freezers after a fishing trip.

However, we do find it interesting to look into different fishing styles and techniques from around the world.

So make sure to check out our youtube video on Kontiki fishing. In this video, we meet up with Chris who is a Kontiki Fisherman in the Bay of Plenty region of New Zealand's North Island. He shows us how his Kontiki works and how he is catching snapper with it from a long sandy surf beach. 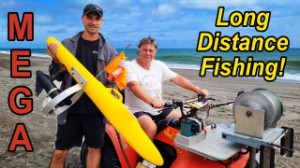 Chris also has a small accommodation on offer which is targeted at fishermen who would like to experience Kontiki fishing or surfcasting and he is happy to teach people how to get started.

We were invited to stay at this beautiful spot for a few nights and took the opportunity to learn more about Kontiki fishing and tap into Chris’s superior knowledge of this region.

We also tried some drone fishing and surfcasting at this picture-perfect beach and at some stage hooked into a big shark on our surf caster. It was only a very short fight as we didn’t use a steel trace.

A bit later in the evening we sent out the Kontiki just at sunset and managed to catch two good-sized snappers. Chris showed us how he is making up special longline traces that don’t tangle up so easily. We also had a nice fire by the beach and it was a great experience.

I always thought that Kontiki is a Maori word with a particular meaning to it as this term is predominantly used in New Zealand.

But after some research, I found that Kontiki is the name that was given to a raft that was used by a Norwegian explorer to cross the Pacific Ocean in 1947. The name is taken from an Inca god.

In New Zealand, Kontiki fishing has a long history and the first Kontikis were small unmanned sail rafts that resembled the Kontiki used in the above expedition.

Those early sail Kontikis could only be used in offshore winds and as a timer a submerged piece of candy was used that would hold the sail up until it got dissolved. Once dissolved the sail would drop and the Kontiki and fishing line could then more easily be pulled back to shore.

Please login to leave a comment
Supporter
Pro Version
Latest Catches
Add Your Catch
Recent Posts
2 Thank You for this Excellent Information 1 That is BIG for a freshie 1 Flake or not Flake 60 Hello from New Zealand 3 Happy New Year! 52 Fishing Spots in Dubai 3 It's Fishmas Time !! 4 Smallest fish I ever caught! 5 All things Alvey 15 What are the accidental catches or by catches while you are fishing??
Post Something