Two months ago I was very excited about my new Shimano OC 12000 baitrunner reel for drone fishing.
It looks pretty good, has a huge line capacity and lots of grunt.
It's been working great and caught some nice fish - until yesterday that is.

After only two months of moderate use it's already broken and I'm a little disappointed.
I have looked after it and there is no corrosion or anything.
But when I tried to reel in a bit of slack line last night, while preparing for the next fishing trip, the reel suddenly completely jammed up. And it made a clunking noise as if something came loose inside.

After taking it apart it I found to weights inside the rotor.
I guess they are counter weights to prevent any wobble when the rotor is spinning.
They are held in place only by a little plastic piece.
This little plastic piece had some sign of damage and those weights just started moving out of place when the reel was spinning and after a few turns jammed up the rotor.
I couldn't find any way to fix it and keep those weights in place without the reel jamming up.
The only way was to remove the weights and use the reel without them.

Now I can still use the reel and it seems to be working okay without weights in it.
But I'm really baffled at this construction and that after only two months it's already broken.

Has anyone else experienced problems with the counter weights in the baitrunner series?
I know that the OC version is a little cheaper and less sturdy than the D version.
But it should at least hold up to it's specifications. Maybe it wasn't a great choice for drone fishing after all.

Anyhow - here are a few photos of the problem. 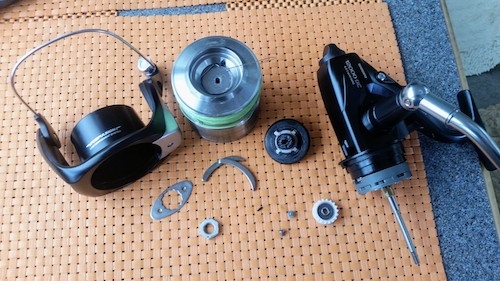 this is the part of the rotor that's holding the counter weights. 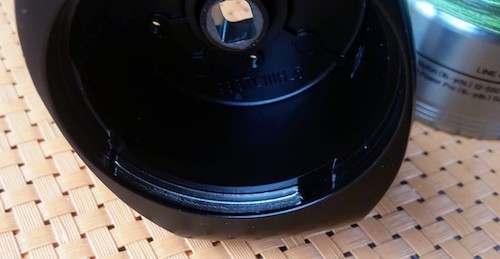 those are the two weights 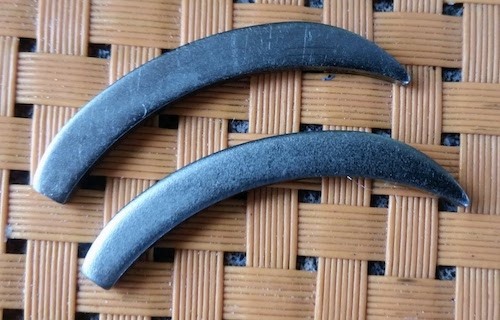 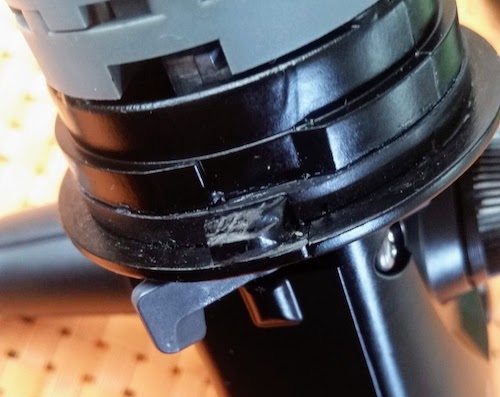 I have had a baitrunner 3500 for about 30 years and still excellent - made in japan ,yours most likely made in china for a few dollars

I am intransit and sitting on the car tail gate. Hard to see the PC screen in this sun light.

You should take it back it will be under warranty. Or contact them online.

should have bought the reel long time ago, like you did.
Maybe the production quality went down over the recent years?

I wanted to take it back to the store for warranty. But as luck will have it, I lost the purchase receipt.
Usually I take a photo of my receipts but this time I must have forgotten.

Anyway, I have been using it without the weights a few times now and seems to be working fine.
Can't really feel any difference when reeling in.

Maybe I should contact Shimano directly and see what they reckon.

It is very disappointing. Fishing gears are not cheap and easy to break. Just need to catch more fish to make the most out of them!!

OK. I am back at my house sit, so I now have phone and internet

Yes that is what I would do...contact Shimano directly. Don'y forget to mention FR

yeah I did. Just got the reel back a few days ago.

So I contacted Shimano New Zealand and they asked me to take it to the store where I bought it and have it send to them for inspection. I thought that was very nice of them since, especially since I lost the receipt. So that's what I did.

It took about a week for the shipping and assessment until I had it back. The Shimano guys were very friendly and helpful.
In between I also had a quick chat with them over the phone and they told me that they'll glue those weights back in.
I didn't realise they were only glued in, otherwise I could probably have done it myself and could have saved myself the hassle of sending it back and forth. They reckon that they have a special glue for it though.
Hopefully it will last a bit longer this time. For some reason those weights are not mentioned in the reels repair and parts guide.

They also said that the reel would probably work pretty much the same without those counter weights in it.
Which is true, as I've been using it without these weights a few times and didn't notice any difference when reeling in.

I mentioned fishingreminder a few times but they didn't show any interest.
Also asked if a TLD 25 might be a better option for drone fishing. ( I now think an overhead reel is a better choice )
Was hoping maybe they'd offer to send a TLD25 for some more drone fishing videos and testing

Because the reel was away for a week and I was keen on fishing, I almost bought a used PENN Senator 115L2 9/0
This is used by some of the kite fishing guys and has a huge line capacity. It's a bit like a winch.
I might get one of those at some stage if I can find a good deal. Just doubt that they are as much fun to fish with as a spinning reel. They are also very heavy. Maybe a TLD25 would be a more fun reel with a little less line capacity.

That was good of them. I didn't think they would haggle about the receipt.

It would be a special glue, maybe some sort of epoxy. I think a one part isocynate glue would also work, but you would pay $20 or $30 for a small tube.

Yes a small overhead would be my choice. I think I mentioned that before. The only issue is that they don't have (or at least the TLD range) magnetic over-run control. But it does have a basic manual control and a clicker and you are not pulling the line off at high speed. With a little practice it should work just fine.

You will have to learn how to "thumb" line on to the spool. If you want to use braid, get some finger guards. A good quality leather glove and make your own is the cheapest way.

Oh, they didn't bite at name dropping Fishingreminder mmm...Maybe you should have said itsaboat sent you

Yeah. It would work if itsaboat and Mark go and see Shimano in person. Let them know you are from one of the most popular fishing website in the world. They might give you some promotion fishing hooks, maybe one each. Too late anyway, next time

to me this reel looks like a fake! sorry bud! shimano in their reels dont have to use balance weights and also (and this is important like super important) the worm gear inside is usually solid duralumin or other metal hence part of the serious cost (in an original shimano will NEVER bee plastic!). also, i own the 8000 series of the same reel. the gear inside is solid metal - its an alum alloy. please check this - does the reel have a serial number carved on it (not printed)?

i own approximately 10-12 shimano reels. i never had an issue with them. some of them have owned for over 25 years (of very VERY heavy use - especially spinning reels ), little to no maintenance and they still work perfectly. in fact as time goes by they even work better as the gears set.

now the made in china or japan doesnt really matter because shimano will keep the same quality standard.

no quite the contrary.
i bought a shimano sustain 8 years ago for 350usd and a new one 5 months ago with a smaller spool. the newer one is made in malaysia the old one in japan - the new one is better than the old one and lighter as well.

another case study on this - for my bass reels i used to use shimano one baitcast (12 years old) and shimano katana (5 years old) - they are both made in china. supered quality - in fact i am replacing all my daiwas now with katanas. and i will always say this - the worst reels i have ever used are the higher end daiwa reels.

if there is a part on the reel that is not in the destruction manual the reel is a fake! this happened to me in the uk and shimano uk didnt even know how to spot the fake reel.

with shimano anything rather than their reels suck. from rods to lines = bull****.
the next best thing they produce is the shimano orca top water saltwater lures. respect on that - caught me some really respectable jacks and gt's.

It looks real to me

I can't see a bricks and mortar shop selling a fake, then accepting that fake back for a warranty service. Shipping it to Shimano which inspects and repairs before shipping back to the retailer...Nah, way to many people involved....If it was just the retail bricks and mortar shop that did the warranty service, there might be a very slight chance of it being a fake, but even then the chances are very, very slight.

I have never seen a thread line reel that does not have counter weights. A lot of the cheaper ones simply make the body thicker where the extra weight is needed. But which ever way you look at it, a counter weight is needed to off set the weight of the bail arm assembly. Especially when using multiple ball race bearings which will "echo" the affect of any off weight discrepancy.

The "plastic" gear cog is probably nylon. The only load bearing parts of a spool assembly is, of course, the drag and the bail arm roller. I don't know what this "plastic" cog is for. At a guess I would say a "clicker" for the drag control or maybe part of the "anti-reverse". Whatever it is for, it is not a load bearing gear cog and even being made of nylon is probably an over-kill...If I saw this gear cog made of an alloy, I would think 'cheap and old school'.

yeah I also don't think it's a fake one. It was purchased at a reputable store in New Zealand.

The balancing feature is even advertised with this reel on the Shimano Website:
"Dyna Balance Anti Wobble System to create smooth rotation and eliminate vibrations in the reel"

The weights are just not mentioned in the reel schematics for some reason.

But the Shimano guy knew about those weights. Maybe only the 12000 series has those counter weights since they are the biggest reels in their baitcaster series.

There is 12000 OC and a 12000 D available. I believe the D is more expensive, sturdy and has better design.
The OC is the budget version. Maybe I should have gone for the D version.

Anyway I now think that egg beaters are not ideal for drone fishing. Should have listened to itsaboat

They are not up to the task and it's quite easy to jam the line or to accidentally disengage the baitrunner mechanism if a wave hits the line while flying out the bait.