This is the area where I grew up.

All these photos are from the back yard of the house I am sitting...Yeah I know, it's a tough gig, but someone has to do it

. The pics are a bit misty due to a sea mist that has been hanging around all week.

The Shoalhaven River. Nowra city is just to the right. North Nowra is directly in front. So how good is the fishing around here, you ask...Well, let me tell ya...Top right is the northern edge of Jervis Bay, the birth place of Fishing World Magazine. Although their head office is now in Sydney, for many, many years the HO was right here in Nowra. Fishing around here is good enough to have established the number 1 leading fishing magazine in Australia.

I am pretty sure that fishing is not allowed any more at North Head. But that does not change the fact that Jervis Bay North Head is regarded as the second best land based game fishing spot in Australia...Second only to Steep Point in W.A. 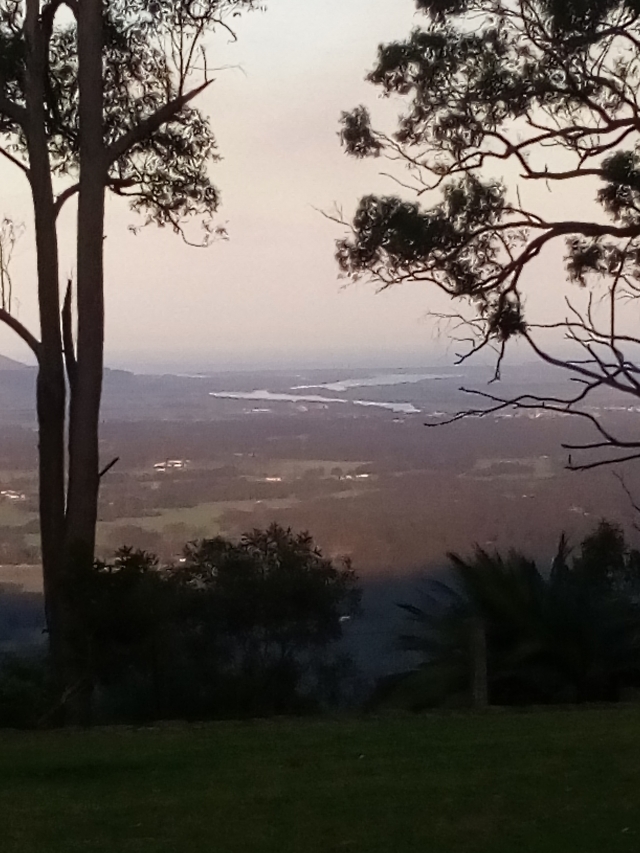 Looking north (still in the back yard of course), it's a bit hard to see in the mist but that is Shellharbour with Bass Point just behind it. Well the new estate area of Shellharbour which they call Shell Cove. Done a lot and I do mean a lot of fishing around there. Just north (about 1 hour walk) is Windang Island where I have done even more fishing...so much so that I am on first name basis with all the periwinkles

. Actually it is not very clear in that mist, is it? I can see it clear as day but the camera just can't see through the mist. Where the small hill in the back ground meets the larger hill in the fore ground you will see a small dark patch, well that is Bass Point. 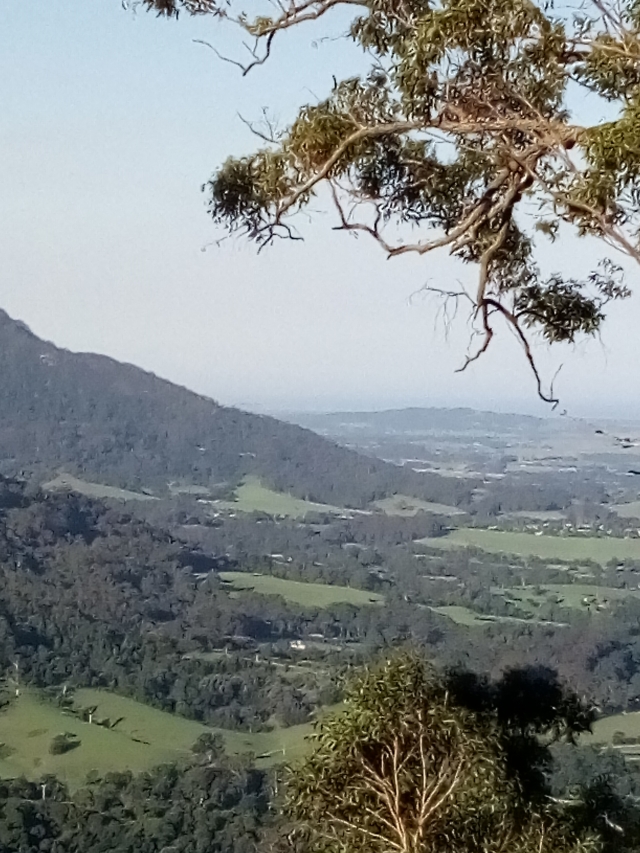 Looking south over the Shoalhaven River. Nowra city CBD with Jervis Bay in the back ground...What can I say...It's a tough gig 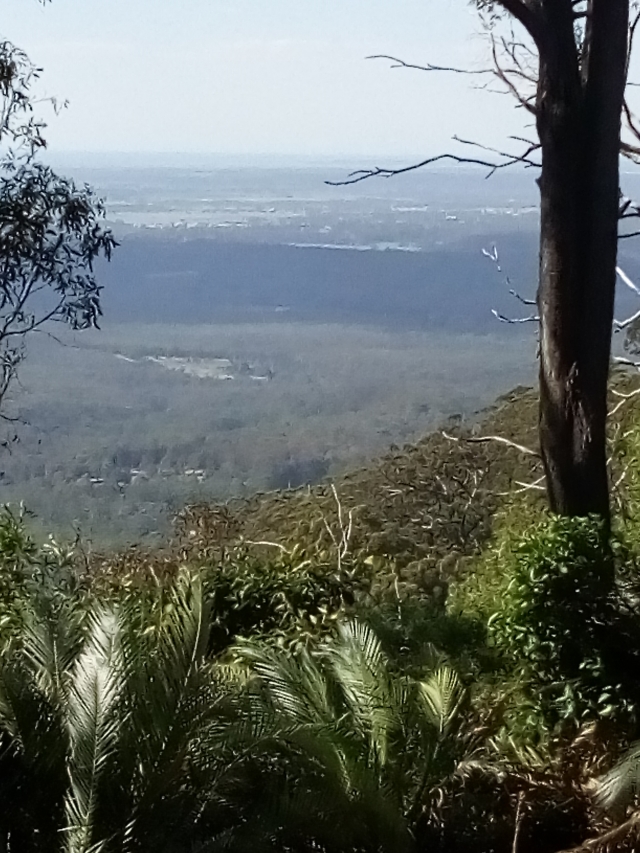 I cannot escape it...I cannot even hide in the garage... 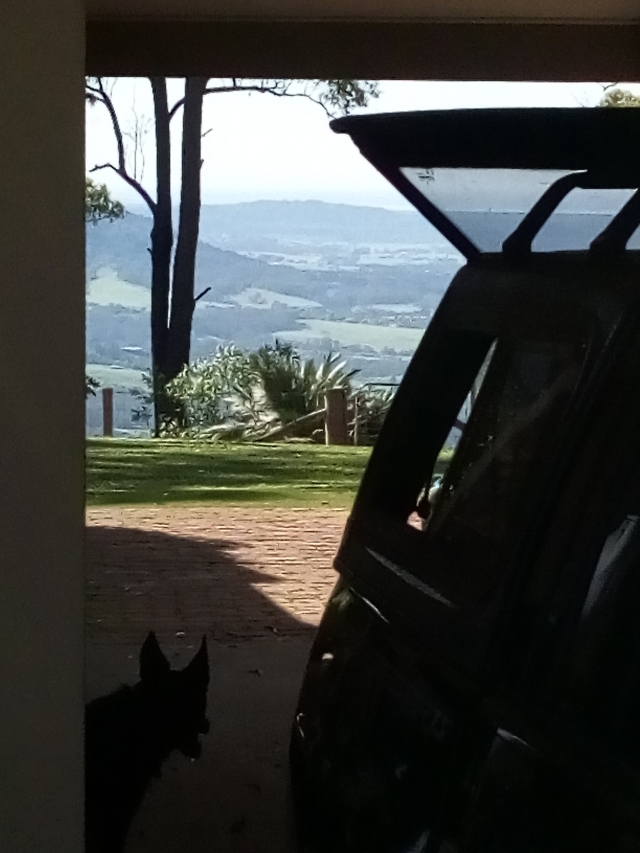 At a rough guess I would say about 120 to 130 km of ocean views over farm land. Bass Point is about 60 or 70 km away and Jervis Bay would be close to that too. A stretch of coast I know well. In fact very well...It is where I grew up.

Yeah, I know...I know...You don't have to remind me...It is a tough gig but I will manage...Just wish I had not done this to my finger, otherwise I could have done some fishing while I was here 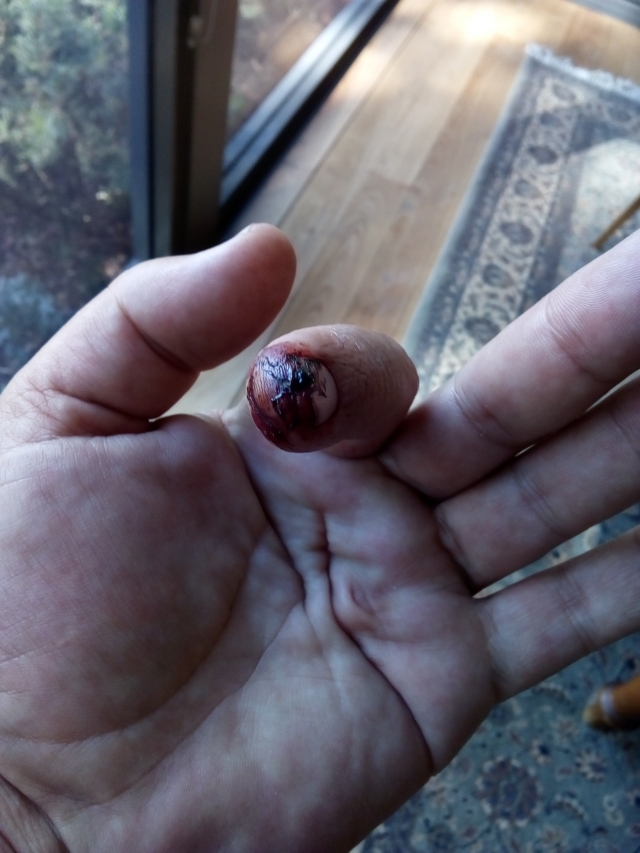 Actually looking at the photo. I think I did a pretty good job putting the tip of my finger back on.

ouch - that looks rather painful.
See - that's what you get from arguing over trout identification, LOL

Hope it gets better soon. Don't know why it prevents you from fishing though.
You can still fish with one hand

And unless you're left handed, you still got your trigger finger intact.
So off to the rocks you go. I want to see some catches from around there. Looks like an awesome place for fishing.
What are the main species you'd be targeting around there?

Yes it does hurt a bit. The biggest issue is the size of the dressing. It needs to be big and thick for padding which pretty much makes the whole hand useless. Even with the thick padding little bumps are a big wake up call. I am here for a few more weeks so if I take care of it, it might heal enough to get a few days fishing in.

Don't know what you mean...There was no argument...You asked why 2 fish caught in the same lake would look and taste different...and of course the answer is because they are 2 different fish

You get pretty much every thing around here. Just land based you can get yellow fin and blue fin tuna, marlin right through to bream, flathead and whiting. Great white sharks are even known to come into the river.

Any of the beaches you will get flathead, bream, whiting and of course salmon. You will also get snapper, shark, rays and dew.

Any of the rocks have good grouper, snapper, both yellow fin and black kingfish. Some of the rock areas produce marlin and tuna. Point Perpendicular (Jervis Bay north head) is famous for ti's marlin.

Huge schools of bonito and tailer often come in very close to both beach and rocks.

Then there is the river...Dew fish around the bridge (or I should say bridges) and along the cliffs. Good numbers of black fish (ludrick), bream and flathead.

Then you have all the by-catches...Sergent baker, ling, dogfish, parrot fish etc, etc.

That is just land based.

well, fingers crossed that it'll heal up quickly. Maybe get yourself a kontiki with an electric winch, then you should be fine with one hand

Just need to fork out a few thousand dollars and find someone to setup everything for you on the beach.

Not sure what you mean by a kontiki. But it sounds like a plan

I got some prawns today. So I might use the heads and chase some bream in the river. A small bream rod should be easy enough with one hand...