yeehaa - got my first snapper with a drone.
Wow wow, that was exciting. And it's a really good sized snapper as well.

Went to a beach nearby and flew two baited circle hooks out for about 300 meters.
Felt some tucks on the line right away and pulled in this beauty.

I used my old abu garcia MI80 surf casting reel with mono line.
On the second cast the bloody thing broke. Can't tighten the drag anymore, must have over tightened it at some point.
The reel was a pretty gnarly and corroded so it might have just reached the end of it's life. Fortunately it didn't give in before this fish was landed. It was a good final cast for this old reel

So for my next attempt I'll be using a new Shimano baitrunner reel with 600 meter braid.
That should work a million times better and with the braid and low stretch factor I'm hoping to feel bites better on such a long distance cast. 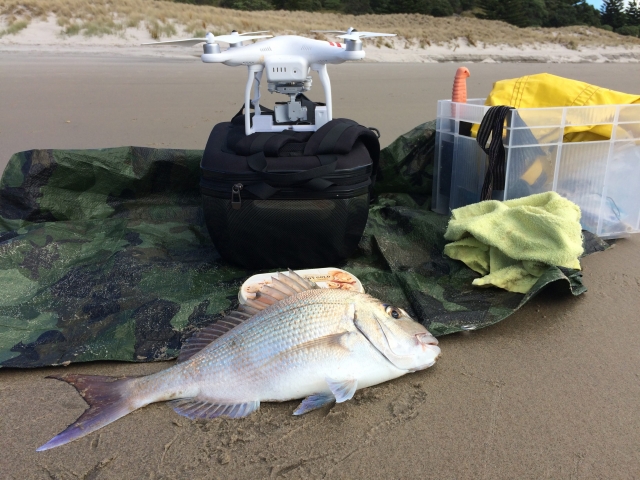 How do you get time to catch fish like that...and fly drones...and do coding...all at the same time

Wish you were here right now...Trying to do a data recovery from a 3 platter 2TB WD drive. I can't think of anything else to try...platter transplant is all that is left...You don't have a donor HD in your pocket do you ?

hmm - platter transplant sounds pretty intense. I probably would have passed out just from watching you.

But I'll let you know in case an old HD platter falls out.

I almost would have had a donor drone for ya, but luckily I managed to resurrect it after that last crash.

Yeah it is not much fun...I would rather be flying a drone or even repairing a drone

It is very delicate stuff. You should have seen me last week doing a head swap. Sweating, shaking, I had to wedge my knees on the table legs

Unless I can find a HD with the exact same circuit boards with 6 heads that I can swap out then a platter swap is the only hope...

I might buy a drone and going fishing, it would be a damn sight more fun and easier

You are not putting those pics in by hand are you? You could store them on an external hard drive...I just happen to have an old one that I can let you have cheap. Of course postage is a risk, so you would have to check it when it arrives...can't trust Australia Post

But you can have it for $20 plus postage, of course

Yeah a drone sounds good. I have a small chopper (just large enough for out door flying). But I can see how useful a drone would be. You could spot fish from the air...Yea, might look into it

no thanks, don't need your old broken hard drive, but good try. LOL

yeah spotting the fish from the air and then dropping the bait right in front of them is the idea.
I'm especially keen on trying that with kingfish at some stage.

But so far I haven't managed spot any fish from above. There is so much going on.

You have to control the drone, watch the reel and line, make sure the drop mechanism is working and hope that the thing isn't crashing half way out because of a line tangle or freak gust. It's all quite exciting to say the least.

So with all that going on I haven't even looked at the video screen while flying out the bait.
But I hope after a few more flights it'll all get a bit easier and more comfortable to handle. Then I should have enough time to scout out the sea beneath the drone for fish and structure.

I managed to crash it twice already.
Last time it ended up upside down in the wet sand because of a line tangle. It had sand everywhere.
The other time I wasn't watching my rod tip properly and the drones propellers caught the tip while I was trying to attach the bait. Ended up with a crashed drone, broken propellers, line wrapped around the motors and the rod actually got hacked into two pieces from the impact with the propeller. I though that was it - but still flying, haha.

The most exciting part of drone fishing could be the moment while the drone flies with the hooks over the sea.
Any obstacles(seabirds, wind or handling errors) can take the drone into the deep sea and never see it again.

Certainly, it is a very good idea and a fun way of fishing!

Did you catch it off the 90 mile beach? When I was living in NZ ( I live in Mississippi now) I commercial fished for snapper on the N. island. The fish pictured is called a snapper in NZ but in America it is a member of the porgy family. We couldn't sell it to American buyers so the Japanese bought it ALL for 21 cents a pound!

that's interesting. I haven't heard the term porgy so far.
Looks like the terms porgy and bream are the same and both refer to the same family of fish.
I knew that snapper is a member of the bream family

When did you do the commercial fishing? 21 cents a pound is super cheap.
I've seen them being sold in restaurants in Japan, Korea and China.

They are very expensive to buy in the shops in New Zealand. But then everything is super expensive here.

The 90 mile beach is a famous surf casting beach on the West Coast in New Zealand.
I haven't fished there yet, still on my todo list.

I caught this one off the East Coast at the Whangarei Heads. Great fishing all along this part of the coast.

Awesome fish from a new technology.

Really interested to see how this all becomes refined and improved

I practice fillet and release

Your a very brave man! I fly UAV’s lots of them (DJI Inspires and Phantomsamd the dreaded 3DR Solo) and there is not a chance I’d put any of them out over water with the possibilty of suddenly attaching an unknown dynamically variable payload to them! What release mechanism do you use to get the down-line off when you hook up the fish?

Haha, yeah you're right - it was quite nerve wrecking in the beginning. Still is sometimes.
But I've gotten a bit more confident now. I crashed it twice - due to beginner errors.
One time I move the rod tip into the propellors (ouch) and another time the line got jammed because it was wrapped around the reel. The drone tried to pull the stuck line and then crashed upside down into the sand.

I was very lucky the first time. My cheapish rod broke in half, 3 of the propellors were totally destroyed, line was wrapped around the motors and the drone has a bit of a burn mark on the top of the housing. I guess from one of the broken propellor blades slamming into it. I thought the drone was a goner.
Surprisingly it didn't take any other damage and after replacing the propellors all was good again

The second time when it crashed upside down into the wet sand I also thought it would be the end of it.
But I picked it up, cleaned out the sand, used some salt ex spray and afterwards it was all good again.
Pretty tough drone I must say.

But the biggest concern is still crashing it over water as you say.
I had the main drag engage once while I was flying out to about 300 meters.
I noticed it straight away and opened the drag again. So the drone didn't go down. Once you're out over water and have a bit of slack line out, it's easier to keep the drone in the air if something goes wrong or locks up. Still gotta be quick though

When I started out it was quite difficult to control everything, fly the drone, make sure the reel and line is okay, get the bait attached, etc. But now I think I got the process down and feel more comfortable. Haven't made another mistake for a while and caught a whole bunch more fish

I got a release mechanism specifically for the phantom 3. It's basically a little servo motor, a battery and a light sensor.
The light sensor is attached to one of the front lights, which you can switch on and off with the app.
So you fly the drone out with the drop mechanism closed and hooks attached and when you want to release, you just go into the menu and turn the front LED's on. That works pretty well.

I fly my bait out to about 200 - 300 meters off the beach and usually use a two hook dropper rig. Also used a one hook stray line rig without weight and half a pilchard. That worked pretty good too.

When I first got the release mechanism, I stupidly forgot to switch it on. I had to fly the bait all the way back to the beach because I couldn't release it, LOL. So now I learned to always double and triple check everything before flying out the bait.
Still there is a pretty good chance that you could loose the drone over water. Gotta be prepared for that and take the risk.
I bought a cheapish second hand phantom 3. It would still be a real pain to loose it but better than loosing a brand new phantom 4

This is the bait release mechanism: 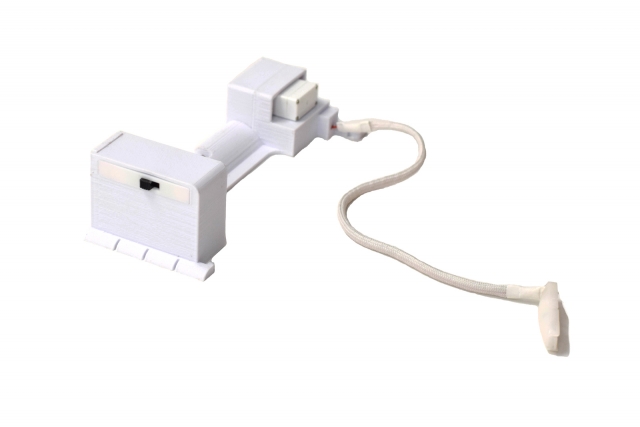 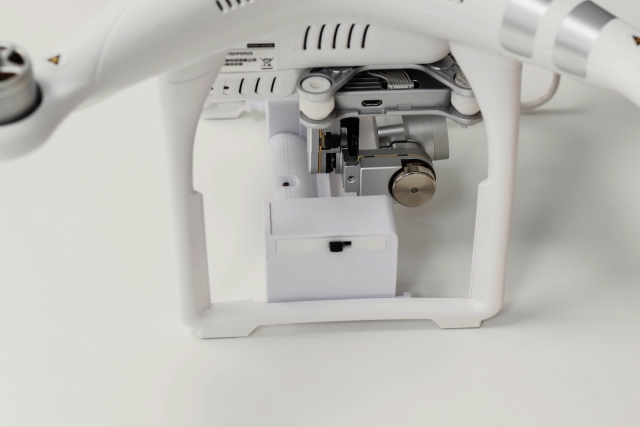 I think it's way too expensive for what it is. I got mine second hand for a lot less money.
But you could also easily build one yourself with a bit of electronics knowledge.

Very very cool....but I think I’ll stick to the stern of the boat and hopefully keep the aircraft dry! But damn now I’ve seen the release I just might have to have a go!

you should give it a try

It's heaps of fun and you don't have to take the boat out each time you want to go for a fish.
Just pack the drone, a fishing rod and some bait and drive to the beach.
Super easy and doesn't require a lot of planning. And you save heaps on petrol that you'd otherwise need for the boat.

So even if you loose a drone per year, you might still save some money, LOL

Yeah bait runners work really good for that, eh.
Only problem is that the clicker of the secondary drag stopped working for me after a short time and it's a real pain to fix.

reply
Share
Supporter
Pro Version
Latest Catches
Add Your Catch
Recent Posts
1 That is BIG for a freshie 1 Flake or not Flake 60 Hello from New Zealand 3 Happy New Year! 52 Fishing Spots in Dubai 3 It's Fishmas Time !! 4 Smallest fish I ever caught! 5 All things Alvey 15 What are the accidental catches or by catches while you are fishing?? 1 New Fisherman, New Boat
Post Something