I was holidaying in Batemans bay for a few days. So I was trying for a Jewie in the Clyde river. I heard the locals said there are plenty of Jewie there. Anyway, I managed to make my own slide bait rig and sent out a live yellowtail. Nothing took it for a while, and then the tip of the rod started tapping for a bit. I made a mistake of retrieving it in to check it. The live bait still there, still alive and well. So I cast the whole thing out again (instead of sliding), so obvious it's not out far enough I guess. Waited for another little while and the rod started bending down so I was sure something was hooked on. I quickly grabbed the rod and retrieved, it then felt like a snag, after trying to break the line by pulling it hard it was free and then the fight was on again, something was still there attached to the hook ... it's an eel!

It was late in the night so I took it back to the motel thinking I'll kill it and clean it in the morning. But when I woke up in the morning it had already crawled out of the bucket and died on the floor. I didn't fancy eating a dead eel so I filleted it and cut it up into small pieces to use as bait to see what bites. The locals tell me eel as bait is good for bull sharks and gummy sharks, but I was hoping to see if I could catch something else with it too. Went back out to the rock after cutting it up to small pieces. I was surprise that there's a lot of small tugs, which tells me the small fish are biting it. As I was fishing 3 rods I put down the big rod that had the eel bait and was baiting up the other rods, then something suddenly grabbed the eel bait, pulled my big rod and immediately the 20 lbs braid snapped. I regretted not having the drag loosen. So I have no idea what it was that snapped my line.

Has anyone else here used eels as bait? And if so, what fish were you able to catch? I'm curious!

I have never tried eel for bait. But it is apparently a very good shark bait. I know of people that have used eel around Batemans Bay and Ulladulla for tiger sharks. 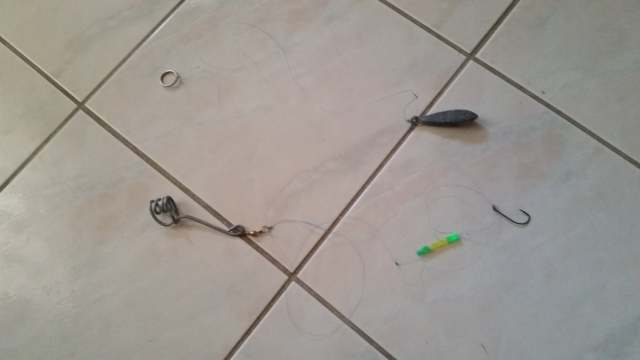 OK, so I couldn't find any other size appropriate wires around the house. I ended up using this spare tent peg, bent into the shape of a slide rig I saw on ebay. For the ring I used a key ring, and for the sinker I used a snapper sinker instead of a grapnel sinker. Next step I will try to improve the sinker by attaching some wires to it to make it function more like the grapnel sinker.

Mate, that is awesome

I will be in east Gippsland about April. I am going to give this a try.

No, the swivel is fine. The tent peg is quite tough. Once bent it into shape the swivel stays in there. I'm quite confident that if I hooked up a Jewie other bits might fail but the swivel won't come off.

Back to the question of using eel fillet for bait ... there were plenty of small tugs before the big pull and line snaps. I'm guessing the small tugs are from small fish, like the little undersize tailors or the puffer fish. And if small undersize tailors were among the small fishing tugging at the bait then in theory it could catch the bigger tailors, provided the sharks don't get there first. I suspect the pungent smell is what brings the sharks there quicker than other species. But that's pure guess. Would love to hear if anyone has caught anything other than sharks using eel in Australian waters

I forgot to mention that had I had more time I would have fixed up the line after it's snapped, and tried again with another piece of eel fillet, freespool the reel, and see what I could hook up. Unfortunately I run out of time. Had to pack up and go, so I threw away the stinky eel fillets in the end

reply
Share
Supporter
Pro Version
Latest Catches
Add Your Catch
Recent Posts
4 USE OF SPOONS 6 Getting started with Drone fishing - a step by step beginners tutorial 6 understanding the fishing clock 3 Crazy Paddle board fishing adventure for trout. Fishing while rafting down a river, can it be done? 4 A bit of rain... 5 incredible fishing spots at the end of the world 4 Catching BIG river PERCH 4 troltek 3 Best fishing Spots in Dunedin, New Zealand 2 Birddog is doing great
Post Something