I wanted to share my favourite German fish recipe with you.
In northern Germany we use a lot of Herring, which is quite an oily, fishy tasting type of fish.
And we have a few really tasty recipes for Herring which can be easily adapted to any oily fish.
Here in New Zealand for example I use Kahawai for this recipe. Kahawai is also known as Australian Salmon.
But in other parts of the world you can use any other oily fish such as Mackerel, kingfish, etc

Anyhow I grew up with this recipe, you can actually buy this canned in any German supermarket.
But since it's not readily available in other countries I decided to make it myself and it turns out that home made is even more delicious than store bought. Basically it's a crispy fried and then pickled fish. In German it's called "Bratherring"
After it's pickled for a few days you can eat it on bread, with potatoes or just as a side dish.

I hope you'll get a chance to try this recipe and let me know if you like it.


a snapper a day keeps the doctor away

That is really interesting....Thanks for sharing

As you know I am qualified in cookery. I am by no means the greatest chef in the world. In fact I think I am not all that good to be honest...But people that eat my cooking would say different....

I never would have thought of pickling cooked fish...Raw fish is a given. Raw pickled fish is common...but pickled cooked fish ??

I am going to give this a try.

yeah give it a try, it tastes better than pickled raw fish in my opinion.
In Germany we have the two different types. Pickled raw herring also known as rollmops and then pickled fried herring.
The fried version is very popular in Germany but for some reason it's not very well known outside of Germany.
I found the canned version in some speciality shops here in New Zealand, but way overpriced.

That's how it's being sold in Germany: 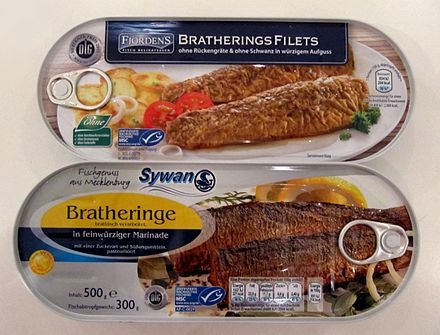 with a Herring - the whole fish is fried and pickled, including bones.
But with bigger fish like kahawai/australian salmon I prefer to remove the skin and all the red meat before cooking.
Gives it a cleaner taste and better presentation.

I personally didn't like the idea of pickling fish. Sour?
From my kindergarten taste bud, it is a big No-no that fish is sour. Fish can be sour?

Since we have plenty of Kahawai in New Zealand. They are relatively easier fish to catch from the shores.
I have cooked the different ways, smoked, panfried, fishcaked and Ceviche.

I found this recipe is the most well matching way to cook this type of oily fish.
The taste is surprisingly good and we can enjoy the food for a longer period!

I saw these cans in Aldi a couple of weeks ago. I was going to get one but even for Aldi it was expensive. I didn't realise it was pickled. I thought from the can it was smoked like a kipper. I went to Wagga today but didn't see any in Aldi so maybe it was one of their "special buys".

Would this work with carp?

Would be good to get one at Aldi just to see what it's supposed to taste like. Although depending on the brand, some are better than others.

Not sure about carp. Don't think it's firm enough.
Trout or salmon might work better as freshwater fish.

But to get the real German taste you'd need something closer to a mackerel.