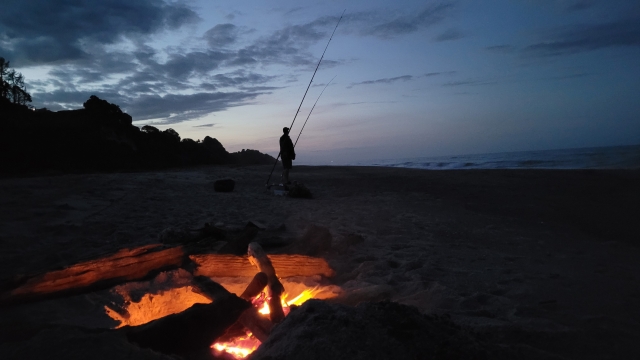 Did you catch anything?

I was thinking of doing some over nighters by the river...when the flooding goes down !!

I am not going anywhere near the coast !!!...2 summers ago we had fires - big fires. Then last summer we were all in lockdown. So this summer is the first when people can go "down the coast". Can you imagine what it will be like ??...The coast is bad enough during a "normal" holiday season...I aint going anywhere near it until all the free loaders go back home !!

We never seem to have much luck during the night. Usually getting some bites just before dark and then once it's completely dark no more bites. Then I get bored and go home. But it seems lots of others have good luck with night fishing.

Get one of those white plastic buckets. Usually about 20 or 22 liter. They sell them for painting and any hardware store will have them. Put a lantern (battery) in the bucket. Bonus if your batteries can be recharged on solar, like mine

. Put the bucket near the water edge but not close enough to be washed in by waves.

The lantern in the bucket gives off enough light to attract bait fish and squid. But it will stop you going "blind" so you keep your night vision. You can also cut a hole in the side of the bucket for extra light. Just make sure you have the hole pointing to the water so that your night vision is not affected.

You can also buy purpose made lights. Some lures come with lights. Also floats. Some even flash...But you can make one very cheap and easy. A simple glow stick will work. I have used a milk bottle which works well. You need an opaque bottle with a handle, like a milk bottle. The handle gives you a tie point for your rope or line. Put a small but robust torch in the bottle and cast or throw it out. Then cast your bait near it.

the perfect place to find peace

The best time to fish. That's when the monsters are out to play.

I think this subject is very relative.I say that the hunting discipline is related to the slaughter, my boat, etc. situations.