Whatever follows, now or at any stage in the future, we can all blame itsaboat for the final nudge that sent me on this neat Alvey journey of discovery. In short order I went from thinking Alveys were just an old, redundant brand the grumpy old surfcasters and rock-hoppers used to owning five of them.

My first and still my favourite is an old, cheap model bought off facebook. The seller wanted $10 for it, didn't have change for $20, and I still got a whopper of a bargain. It's a 520, direct-wind bakelite model.
Here's ugly Betty, AKA anti-slammer 1, henceforth known as AS1: 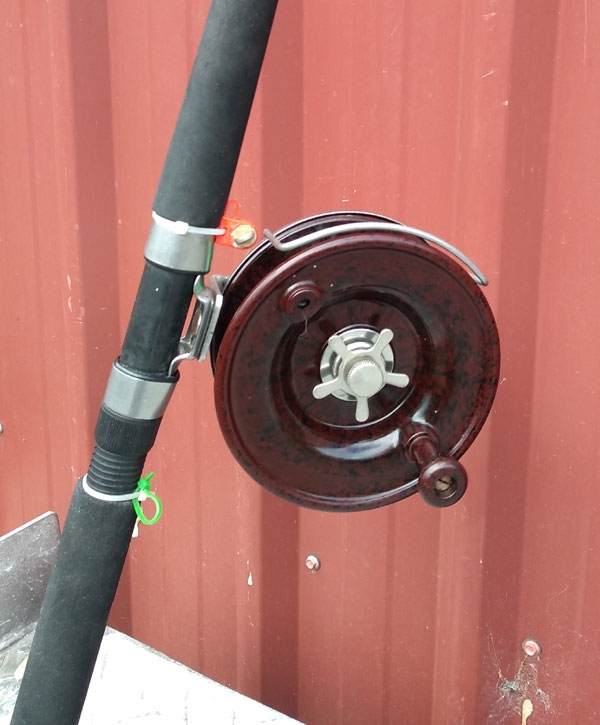 Another of the same model, used, but with a fibreglass spool came up for sale and I grabbed that too for about $30, IIRC. At those prices two means one can be a donor if need be.

There are three bought-new Alveys to round out the famous five, but realising I may have overcooked the purchases, I have already sold one of the new, unused models.

One of the two remaining bought-new models is one of their cheapest, which I've been using to catch livebait, for a few months now. There are thoughts of trying to target a kingfish with it, just for fun, but that challenge is a bit further down the to-do list.

The second of the remaining new Alveys, a 50C model, was bought with a project in mind. That being to see if I could work it up to being suitable (as much as such a lunatic idea can be) for chasing marlin. After too many hours down that rabbit hole I have abandoned the project and returned the reel to its as-new, unused configuration. They've designed it to be perfect for their target use, which I see as kahawhai, trevally, snapper and kingfish. But there's just not enough room left in the engineering capabilities to turn it into a marlin reel and when I tried to push its limits it failed and I had to buy a new friction tube off Alvey to get it all back to as new, unused condition. So, I'll be selling that reel off ASAP (-hint for Mark, now's good).

The last few months livebaiting with AS1 has been the most fun I've ever had fighting fish. It's been very refreshing to learn new skills like palming a reel. This is necessary on kingfish and sharks especially, because this reel only had about 2kgs of drag.

I write "had" because it is such a good reel I thought why not try to upgrade it to see if it would become a marlin reel. The crazy dream of an Alvey marlin just got crazier because it looks like AS1 is going to 'handle the jandle' as we say here. With $15 in parts and $40 of TIG welding, AS1 is now up to just under 7kgs drag. I've still got some final lapping to do which I hope will bring it to 7kgs at full spool.

Having burned my gloved hand palming during a shark fight recently, I knew it needed to have more drag and I've also bought but have yet to try, heat-proof gloves that those with pizza ovens use, rated to 500°C.

What I didn't need is the clicker. So, that came out to make some room for a washer: 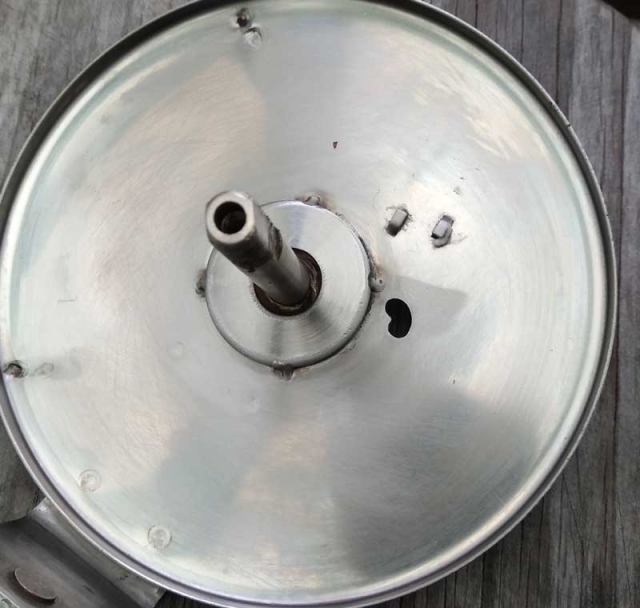 This washer is needed because the backing plate is dished, not flat. So I lapped a washer flat and had it tacked in to stop it spinning.

Given there's no clicker, I machined the gear/teeth for the clicker off the end of the spool so I had room and a nice flat for the corresponding washer on the spool. But how to fix a washer into notoriously fragile and fickle bakelite, so it doesn't spin? Found a threaded pipe end that when cut fits perfectly over the spokes of the spool and with a bit of filing of the inside, snugs up nicely against the bakelite of the spool: 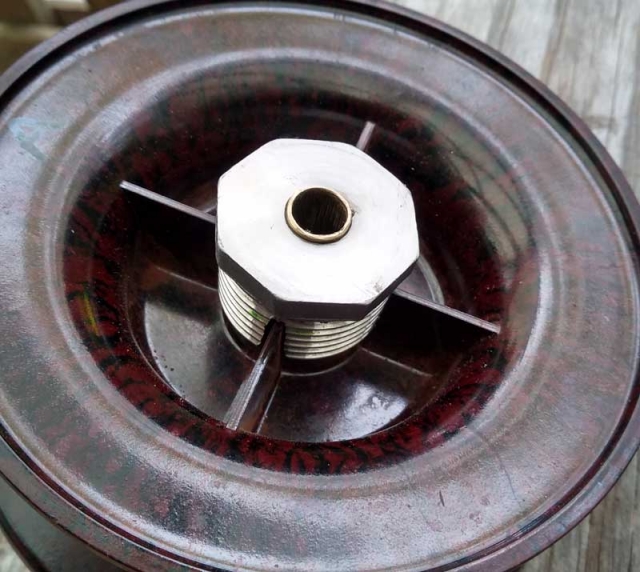 So, that's the inner drag washer done. Onto the outer/front/top drag washer. This was easy. Just find a matching washer, lap it flat, and have a spacer nut TIG-ed on so my fingers can still get between the legs of the star drag adjuster: 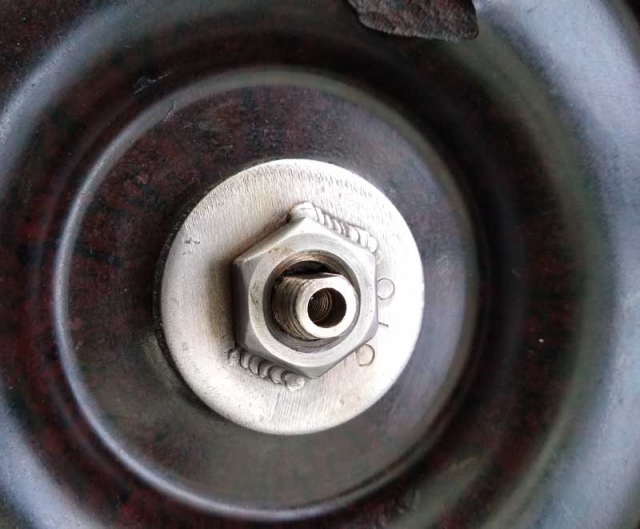 While we are TIG-ing I may as well deal to something that could be a potential problem. With the reel full and the wind-on leader wound on when leadering a (hopefully big) fish, there may be enough rod bend under those loads for the leader to rub against the rivets that hold the rod seat part to the body of the reel, so I had that stitched and will remove the rivets. They also corrode a tiny amount and while it's just a patina, I don't like it on an otherwise stainless steel reel body: 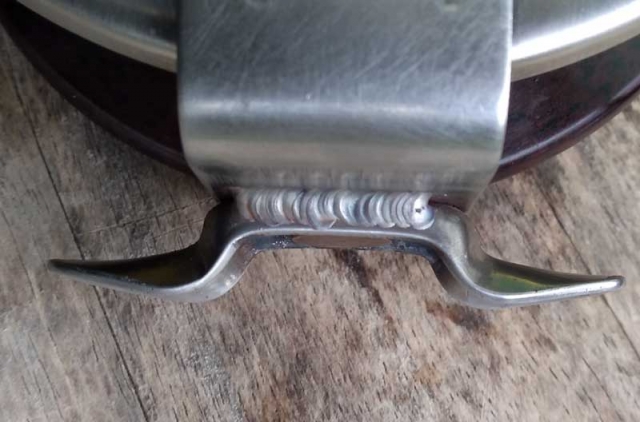 So, while I've yet to do a final lap with some compound that's coming tomorrow, it is just under 7kgs of drag, using carbontex washers. By the time the washers are lapped and seated fully, and a big critter has screamed 200m off the spool, I suspect the drag it'll be experiencing is likely to be approaching double digits. My hand wins a reprieve.

There is certainly scope to make the inner and outer washers bigger for more drag, but I'm pretty happy with where it's at so far. It feels super smooth, no high-spots anywhere. So, the final test will be on a reasonable shark sometime ASAP. If the reel and myself come through that unscathed, I'll be selling my new, unused, Penn Fathom 40N 2-speed lever drag reel.

Before the mods, it has landed a snapper over 20lbs, a near 2m bronzie, and this second-place getter (in a local comp here) kingi:

If anyone reading this has suggestions on how to improve AS1, I'm all ears/eyes. There are bound to be a few Alvey vets who have a few tricks I hope they can share.

You are welcome...I am always willing to offer nudges

Quite an interesting project you have there.

Could have been worse, much worse.

Yes. I saw that in the news.

Fingers crossed it works out well.

On only slightly related news, I used diamond lapping paste on the washers of AS1 to get them mating perfectly and what a difference that made. I would not believe it could make so much difference but AS1 is now over 10kg drag and silky smooth. Very, very stoked with that.

Super-pumped to get back on the water and find a shark that'll give it a good shakedown test.

reply
Share
Supporter
Pro Version
Latest Catches
Add Your Catch
Recent Posts
2 Thank You for this Excellent Information 1 That is BIG for a freshie 1 Flake or not Flake 60 Hello from New Zealand 3 Happy New Year! 52 Fishing Spots in Dubai 3 It's Fishmas Time !! 4 Smallest fish I ever caught! 5 All things Alvey 15 What are the accidental catches or by catches while you are fishing??
Post Something